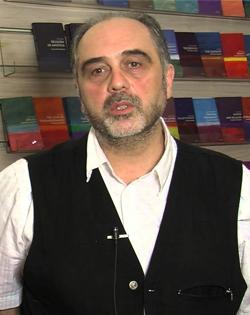 Director of the Institute, member of academic board

He is Director and Professor of Arts Research Institute, Ex-Chair of adviser’s board of Eastern European Partnership culture program. He is member of different international institutions, advisers and scientific boards.

Since 2007 supervisor of MA and PhD programs.2016-2917 research exert for UNESCO CDIS research.

He is the chair of academic council of the magazine Arts Theory and Practice Studies. Representative of European Festivals Association in Georgia.

As practitioner since 1990 he runs several hundreds of local and international projects as initiator, manager, producer or participant.

Levan Khetaguri is a president of Stichting Caucasus Foundation /The Netherlands/. Since 1997 Secretary General of ITI Georgian National Center and Director of the European Theatre Research Institute in Georgia. Member of  FIRT. 1997 Member of Gulliver /European Intellectuals Network/.

Since 1981 author of over 80 publications /editor and translator/ in the magazines and newspapers (Georgian, Russian, English, Polish, German, Azerbaijanian, Slovak etc). Author of several books. In 2000 was awarded by Swedish Writers Guild. Since 2008 member of European Cultural Parliament and strategic group of Soul for Europe movement. Since 2008 Secretary General of Georgian Regional Theatre Network and since 2011 Secretary General of UNIMA Georgia. Since 2012 member of advisory committee of Eastern Partnership Cultural Program/.